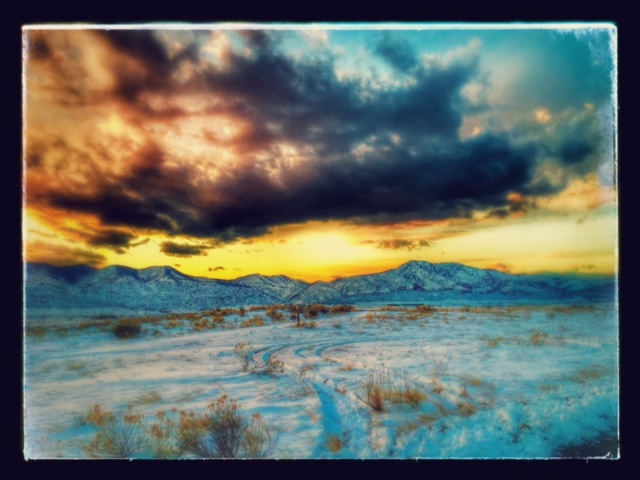 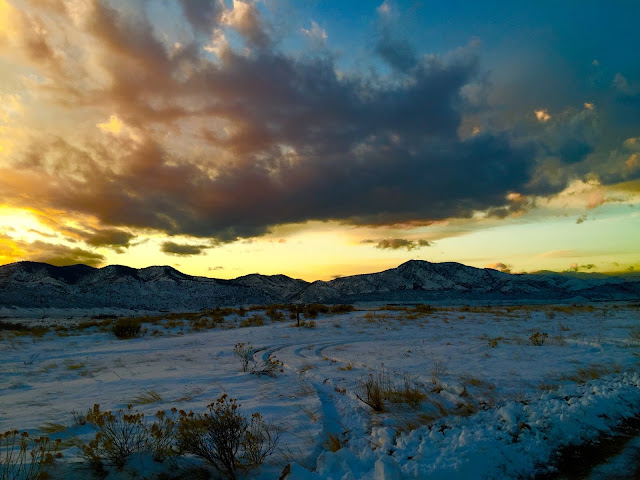 
- Brady and I decided to move to Colorado.  We sold my townhouse, packed up everything and hit the road heading west in April.   We got settled in pretty quickly and were immediately climbing the stairs at Red Rocks, heading to the Incline and exploring new trails. 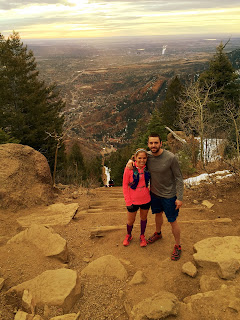 
** The Incline - A favorite training spot of ours.  When we first moved here, we were going down to the Incline every weekend.  But as summer rolled around it started to get more and more crowded.  One day we got there at 6:00 AM and the parking was full, the incline was crowded and there were people all over the Barr Trail - we decided not to go back for a while!   My first Incline time when we moved here was 33:00, my fastest time of the year was 27:54.  I've set a big Incline goal time for myself in 2016, we'll see what happens :)

** Red Rocks - Another training staple of ours is Red Rocks!  We love doing the stairs there but during the summer there are concerts every day so we aren't able to use the stairs but running the roads at Red Rocks became an instant favorite of mine!  It allowed me to run a bit faster than on the trails but it was also really scenic and had some nice elevation gain!   My first all out climb time was 2:47, my best for the year ended up being 2:15.


** Vertical Kilometer - I think the Skyrunning series has some really cool races, I love doing vert so I knew we had to do the Vertical Kilometer in Aspen.   Talk about a challenging race, more than 3k elevation gain over the course of 2.7 miles!   The lead group started off running the steep section at the start of the race so I followed them however they quickly pulled away and I found myself running/climbing solo.  Brady wasn't too far behind me but once we started hiking, it didn't take him long to pass me.  There weren't many people behind us either which was a new experience!    As we got closer to the finish, I saw Joe Gray running back towards us (winner of the VK and US Mountain Running Champion), he turned around and started running next to me giving me words of encouragement - talk about a cool way to finish the race!!   Brady finished in 1:03 and I was 1:04 - need to come back faster and stronger next year!


** Barr Trail Mountain Race - The day after the VK, we ran the Barr Trail Mountain Race which is a 12.6 mile race with about 6k of elevation gain.  It's an out and back on the Barr Trail, turning around at Barr Camp.  This is a great prep race for Pikes Peak since it does about the first half of the course.  After the VK, my legs were kinda tired and Brady left me in his dust.  My time to Barr Camp was ok but then I got a side stitch on the way down which really ruined my race.   Side note, this side stitch has been bothering me on lots of downhills since we moved here - super annoying and frustrating plus painful! 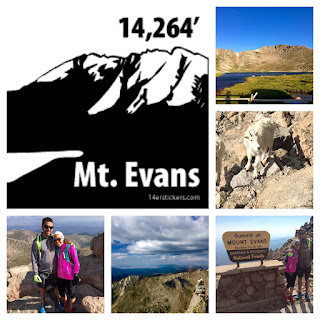 ** 14ers - I became enthralled with the 14ers so we bagged several of them over the summer while training for the Pikes Peak Ascent.  Our first was Mt. Bierstadt, which is one of the easier 14ers.  We then hit Grays & Torreys combined and also climbed Mt. Evans.  The 14ers are great workouts and can be challenging but some of them were so incredibly crowded which just kind of takes away from the whole experience, at least in my opinion.


** Pikes Peak Ascent - The main target race this year was the Pikes Peak Ascent.  We set some decent goals for ourselves and we got in some decent training including the 14ers I however I don't think it was quite enough.   I didn't feel that great at the start of the race, just felt a little off.   I stayed with a pack of people up to Barr Camp but whenever I would start hiking, I would fall behind.   Another reoccurring issue I have, I suck at hiking!    It seemed like after we hit Barr Camp everyone around me started hiking!   The higher altitude was taking its toll and people were slowing down.  I tried to do my own thing and would run little sections passing people to only have them pass me once the hiking started again.   It was a major game of leap frog!   I wore my running vest so I would have access to water however whenever I would try to drink at the higher altitudes, I felt like I couldn't breathe!  It was warmer too so that seemed a bit draining.  I tried to keep up my run/walk routine but I was dragging those last few miles!   I finished up in about 4:09 which was much slower than my goal or what I expected!

** Maroon Bells Four Pass Loop - Over Labor Day weekend, we decided to go to Aspen to hike the Maroon Bells Four Pass Loop.  This is a 26-27 mile hike with over 8k of elevation gain including 4 mountain passes.  The Maroon Bells area is incredibly beautiful, seriously the most beautiful place we've ever been!   After 3 of the passes, we could see Snowmass Lake which instantly became one of our new favorite places, the mountains reflecting in the bright colored water was just so serene!!  This was a challenging hike and ended up taking longer than expected which made for a long day but it was worth it!  I would love to run this route in 2016! 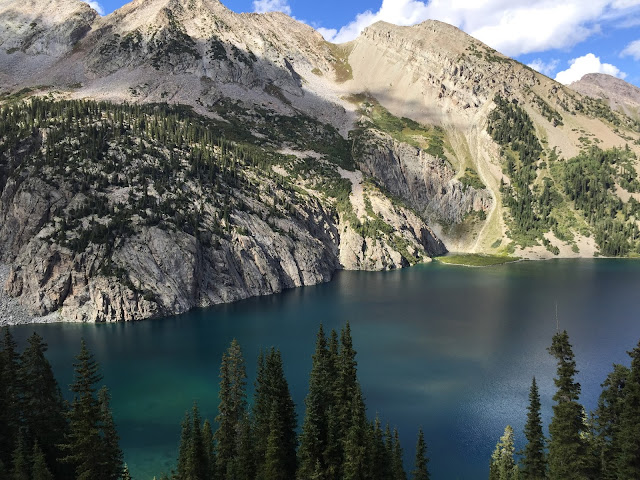 ** Snowmass Lake Engagement Hike - We loved Snowmass Lake so much, we decided to hike back there a couple of weeks later when the Aspens would be changing colors. We ate lunch on some rocks overlooking the lake and that's where Brady asked me to marry him. It was perfect!!!! :) 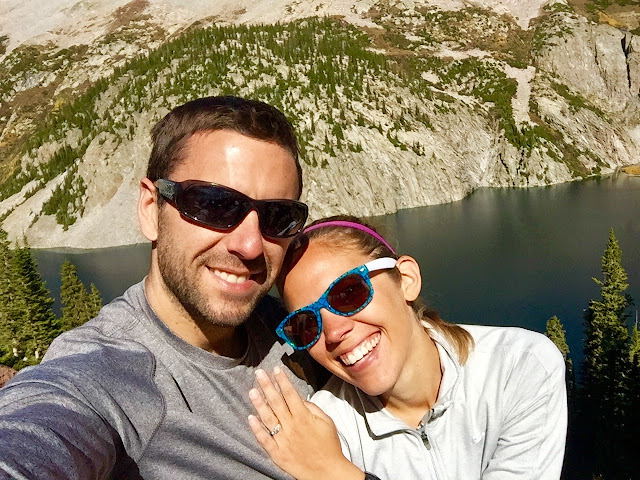 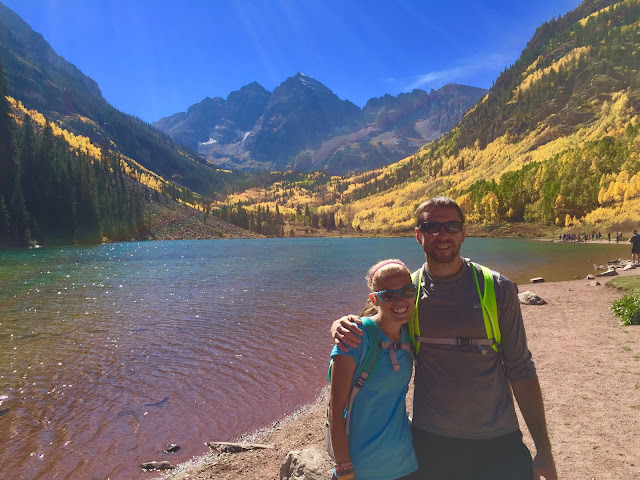 ** Red Rocks 5k - I'm pretty sure this was most challenging and most scenic 5k I've ever done.  The first 2 miles of the race start off downhill and the last mile is uphill on Shiprock Road and ends with a run up the ramp and stairs to the top of the amphitheater.  This race was perfect for us since we train on Shiprock all the time and are always doing the ramp and stairs!!  My downhill miles weren't the greatest but I passed a bunch of people going up Shiprock and up the ramp/stairs.  When looking on Strava after the race, I actually had one of the fastest, if not the fastest, splits on that section of the course - fun times!!


** I've explored so many new trails since we've moved here and there are so many good spots to run after work and on the weekend but there are an unlimited number of options, we haven't even scratched the surface of places to go!!  Some of my local favorites for bigger vert are Deer Creek Canyon, Mt. Falcon and Mt. Morrison.   The Dakota Ridge hogback is great for technical practice.  The big hill at Green Mountain is awesome for repeats.  There are several spots I like for easier runs, Waterton Canyon is definitely a favorite along with the lake by our house and for some easy vert I can head to South Valley, Red Rocks or Green Mountain. 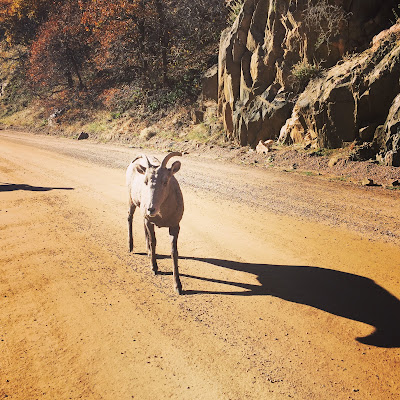 ** I find myself looking around and smiling during each and every one of my runs.  I definitely appreciate the mountains and being able to run in the foothills all the time

** Grateful for my best friend, who I love so much.  Looking forward to a life filled with fun mountain adventures :)

** My easy runs now can either be flat or consist of like 500-600 feet of elevation gain.  My vert jumped instantly once we moved out here and I'm addicted to it!

** Moving was very stressful for me, I found it hard to focus on training and race goals.  I was also sick early in the year so I missed out on some training so I was a bit "out of shape" when we moved here.  I decided I didn't want to put a lot of pressure on myself as far as racing goes, I just wanted to enjoy our first summer here and take it all in.  I wanted to explore the mountains with Brady without being forced into a specific training plan.

** I'm finally feeling confident in my training and have been seeing results.  Recently, I've been feeling focused and strong during my workouts.  I'm ready to target some races next year.  As of now there are a few races I'm really targeting and have set some big goals for myself: Mt. Evans Ascent, Barr Trail Mountain Race, Vertical Kilometer and Pikes Peak Ascent!

** Our wedding is September 3, 2016 at Copper Mountain so definitely looking forward to celebrating with all of our family and friends! 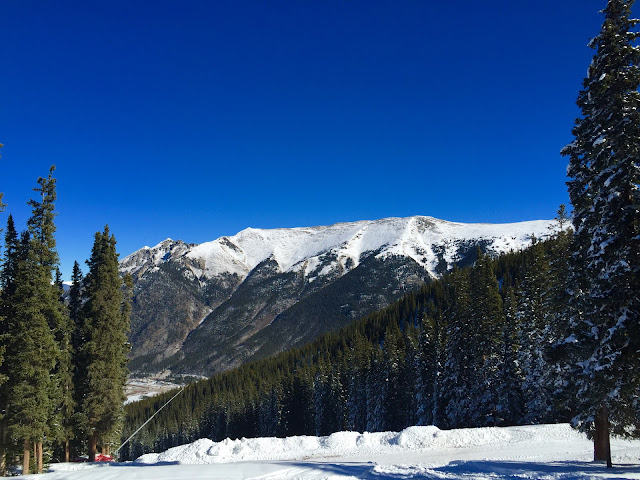